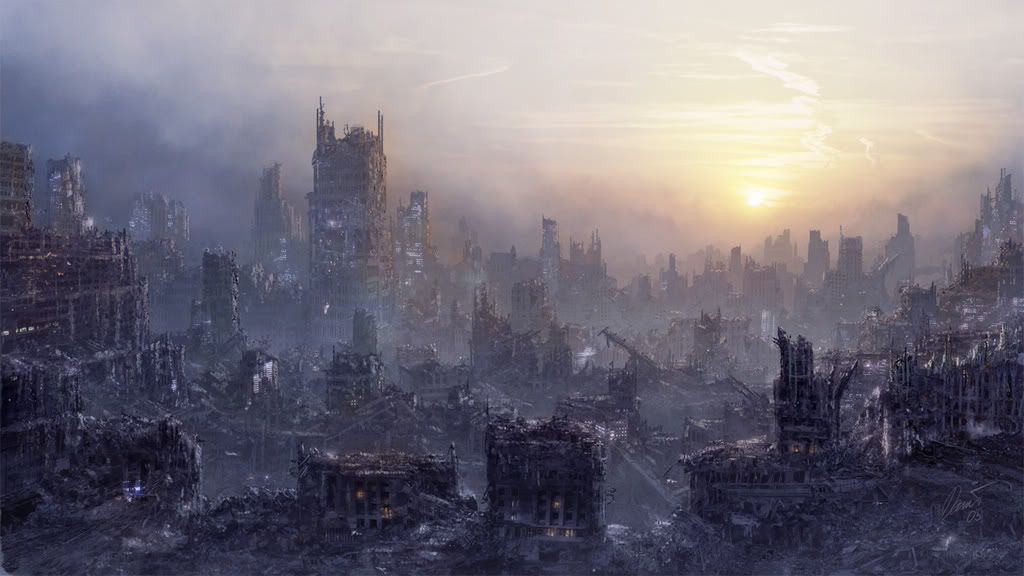 This is a small portion taken from the final stand against the advancing enemy. It details the loss of the Intrepid and the sacrifice of Captain Vosper to help win the battle against the unstoppable enemy.

There was a flash as a ship emerged from FTL directly to the port flank of their defensive line as the enemy charged their weapons. Silvery blue electricity raced and arced around the deep recesses in the enemy hull where the projectiles were being charged.

“ENEMY CONTACT TO THE PORT SIDE! Contacts inside the defensive perimeter, enemy firing weapons!” warned the Carian lieutenant as his emotion seeped into his otherwise deep stoic voice.

“Captain Vosper! Enemy contact to your port side!” General Vane shouted through the channel to the captain of the Intrepid.

“We see it, General! Brace for impact!” Captain Vosper shouted over the comm as a video feed popped up on the holo-display. The video rocked and fizzed as the ship took the hit from the enemy weapons.

“Enemy EMP round has knocked out our propulsion and defense cannons!” Captain Vosper yelled through the comm to the rest of the fleet.

“I am diverting some of our fighters to provide close support while you reboot the ship core systems”, Captain Chronolovich said as some of the human fighters peeled off from their position around the Unity.

“Captain, you have an enemy boarding craft approaching from your port side flanked by fighters!” the general said as the display on the Alexander updated showing enemy craft spewing out of the new contact that had emerged from FTL.

“Enemy boarding craft are on approach! Soldiers… defend this ship!” Captain Vosper shouted as she began keying in the reboot protocol for their ship core.

“They won’t take her, Captain!” came a reply from one of the security officers on the Intrepid over the open radio channel. “Lock and load Marines! Time to kill some aliens!”

“Be prepared for a second enemy FTL attack from the starboard flank!” General Vane said as he sent a firing solution through the ship network to the Solaris and Annihilation.

“ Corporal Waters, you will hold that armoury at all costs, they must not get our ordnance. If they detonate even one of those grenades in the reactor room, this ship is lost!”

“Here they come! get ready!”

*Silence over the radio channel*

“Umm captain, they… uh… they walked right by it.”

“What do you mean they walked right by it?”

“I mean they literally walked right past the bulwarks in front of the armoury and down the hall to the infirmary.”

“Pursue with a group of soldiers and DO NOT LET THEM GET IN THE INFIRMARY!”

“On it captain! You three with me, we’re going on a hunt!”

*Gunfire and shouting over comm recording*

“What’s it looking for Corporal? Can you make it out?”

“Hang on, it’s cracked into the X-Ray scanner and is pulling out the radioactive core…”

“Fuck, it charged us! It just dropped the core and turned to charge us! We put it down hard.”

“This reactor defense team 2, we’ve got company, a lot of company! They just keep coming, but they’re only attacking four or five at a time… they’re not getting past us like this, I’m not sure what’s going on..”

*ship gets rocked by a boarding craft*

*Gunfire and screams over the radio*

Captain! The reactor is lost!” came a shout over the radio and automatic weapons fire could be heard in the background.

“Get all remaining crew to all available life pods and get yourself to another ship, I’m enacting asset denial alpha”

“Affirmative, my team and I will make our way to you to get you off the ship! Give us 2 minutes!”

“Belay that order Corporal. It’s the captain’s duty to go down with the ship. You will have 2 minutes to get off this ship. Open a channel to general Vane now!”

The recording stopped abruptly and was replaced with the open channel.

“This is General Vane Captain Vosper, go ahead…”

“General, the Intrepid is lost. I’ve ordered all crew to life pods and am enacting asset denial alpha…”

“Understood Captain, you did all that you could. Get yourself to a life pod and we’ll send someone to come get you.”

“Negative sir. I have a plan to help clear a path, I need a light jump from this location to the middle of the Drift main force. And I need it immediately”. General Vane could hear the captain of the doomed ship tapping quickly into a keyboard and providing her voice identification for an override.

“Navigation, do you have those jump coordinates?” Marcus asked loudly over his shoulder.

“Yes Sir! I’ve already sent them to Captain Vosper and have programmed them into the battle net”.

“Captain Vosper, did you hear that?” Marcus asked loudly as he watched the real time holo-display of the battlefield.

“Yes, sir. The coordinates are primed and I have vented the atmosphere of the ship. I just got confirmation of the final life pod being deployed, can you confirm sir?”

“Can we confirm?!” Marcus asked over his shoulder as he switched his gaze to the self-destruct clock the battlenet overlaid on the holographic projection of the Intrepid.

“Can confirm sir! All life pods deployed and over 76% already retrieved!”

“We’ve got your crew captain Vosper”.

“Thank you sir. General Vane… It’s been an honour… this is Captain Brenda Jeanette Vosper, serial No.: 154-846-974-A of the UESC Intrepid, signing off. Through blood and sand…”

The channel cut out as there was a brilliant flash of light from the port side of the ship’s bridge windows. The Intrepid had jumped, empty space occupying where the human ship had been moments earlier.

“We will prevail…” Marcus whispered, to not just himself, but to the captain currently making the ultimate sacrifice to give them a fighting chance.

The Intrepid blinked back into existence in the middle of the main force of Drift fighter craft and support ships. There was another brilliant flash of light that looked like a star had formed in the middle of the battlefield. As quickly as the light had appeared it vanished, leaving a massive hole in the Drift fleet.