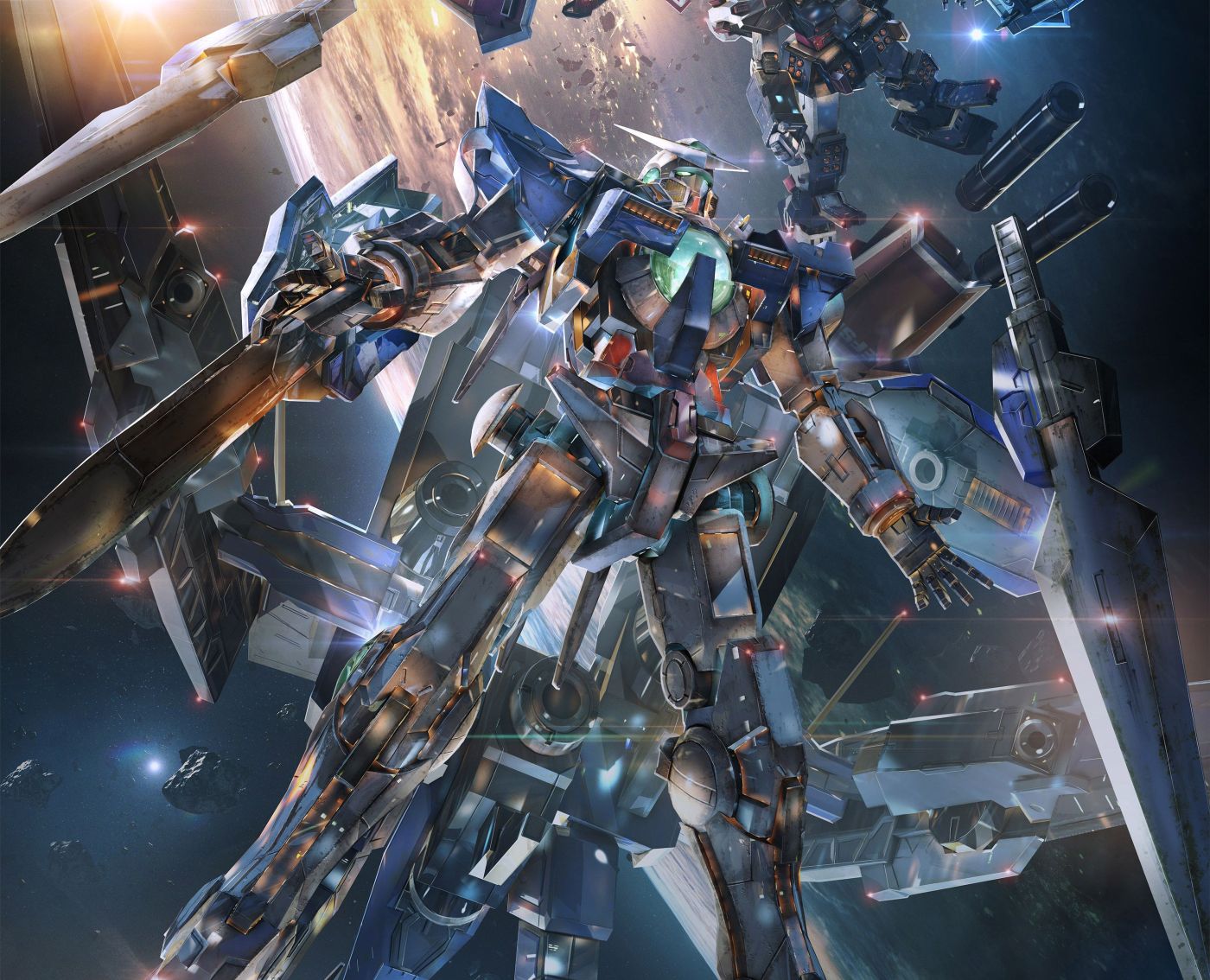 The title isn’t technically correct because there was a few brief nights in my younger years when while perusing channels late at night I would stumble onto an episode of Gundam Wing on YTV or Teletoon Late at Night, but it was definitely not on a consistent basis. Much like my friend Malcolm and mine’s quest to find a show we discovered called The Dating Guy. I will admit that this show, much like Gundam Wing, didn’t have a regular schedule and to be honest, Malcolm and I only ever found The Dating Guy after coming back from the bar just a little intoxicated… That’s a story for a different time though, back to Gundam.

So as I said before, I was never one to sit down and watch Gundam Wing on a regular basis. When I stumbled across it, I would enjoy the episode but without knowing the story or the characters in any real capacity, the show always just kind of fell flat for me. That being said, I did always enjoy the episodes with the actual big Gundam battles, even though they were few and far between, at least in my experience.

To coincide with my foray into the Gundam universe I also purchased a Gunpla kit. For those who don’t know, Gunpla is the term used to describe the Gundam plastic model kits that fans use to make some pretty awesome looking models. I will be the first to admit, plastic models are not my forte. I had to do a bit of research before I decided on the Gunpla I wanted to try as my first model. I settled on the Red Astray model from the show Mobile Gundam: Seed. The particular model is piloted by Lowe Guele who is the main character of that series. It’s a 1/144 scale model which is the most common model for beginners like myself to try out. Unlike most models, this one is able to be articulated into action stances for mounting and display. I haven’t finished putting it together but I am enjoying the process so far.

The first thing that you need to know about Gundam is that while the majority of it takes place in one timeline (Universal Century or UC) there are certain series and movies that take place in their own independent timelines, once such example is Iron Blooded Orphans.

As I said, the main Gundam continuity and timeline is referred to as Universal Century, which started with the release of the original Mobile Suit Gundam in 1979. This main timeline focuses on the build up to, the time during, and time following the “One Year War” between Earth and her rebel space colonies. Most of the iconic images and tropes for the series come from this timeline as well as the main villain and hero.

For ease of reference, whatever the UC year in the show is (for the main timeline) add 2100 for the “actual” date on the standard Julian Calendar.

The shows set in the UC are as follows:

This is another timeline that was started in 1995 in Japan and 2000 in North America. It was aired on the Cartoon Network which helped to popularize Mecha Anime with Western audiences. This timeline features the point of view being told from the outer colonies point of view and having the viewer sympathize with them over the Earth and her military. This timeline was meant primarily to sell more Gunpla and to diversify the Mobile Suits. Each colony builds their own suit and chooses their own pilot, which allowed for a more diverse cast than previously.

Shows in the After Colony Era are as follows:

This is the more modern Gundam timeline that exists as more than just a one off. This timeline was launched in 2002 in Japan and in 2004 in the west (North America, Europe, etc). This also featured a more modern anime art style with large eyes, waifish body types and very elegant mobile suits as opposed to the functionally appropriate suits of the previous eras. This era focuses on the war between the “Naturals”, the regular people of Earth and the “Coordinators” genetically modified people who live in space. The conflict centers around the Naturals and their fight for their right to survive against the Coordinators.

The shows in order for the Cosmic Era are as follows:

Our Century is the final and most current Gundam timeline. Set in the same universe as the viewer this timeline showcases Gundam in a more practical approach. All of the series take place in the real world where everyone is fans of Gunpla. This timeline focuses on people building Gunpla and using high tech arenas to have them battle for profit and fame. The main characters tend to be younger with them building their versions of a Gundam suit and rising to become champions.

The series for this timeline are as follows:

These series all have varying backstories and plots revolving around completely contained story arcs. None of these series reference the other or any other series before them. They take place 100% in their own contained timelines and histories.

The series in these one shots are as follow:

Now that the entirety of the Gundam universe is outlined *deep breath* I want to discuss some of the interesting tropes about the show, I promise it will be quick!

The biggest common trope for pretty much all the Gundam Series is the main villain piloting an uber powerful red Gundam and sporting a mask. This started way back in the OG series from 1979 and has continued in pretty much all the series up until now. Char Aznable is the name of the main antagonist from the original Gundam show. He was shown to pilot a massive and uber powerful red Gundam which was nicknamed “The Red Comet”. Yoshiyuki Tomino, the man who created the whole Gundam franchise and also directed the first show, based Char off of the Red Baron from WWI and even used some of the Baron’s confirmed tactics when creating Char’s movements in the show.

This also goes hand in hand with main protagonist being a teenage boy who inherits the main Gundam from someone and just so happens to be a better pilot than some people who have trained for years. This is especially true in Gundam Unicorn wherein the main Gundam is genetically coded to the young hero so that it will not respond to anyone else. Not only will the Gundam not let anyone else pilot it, but the main character is also the long lost son of the man who built the suit to begin with.

Psycho-Frames are also a very common trope in the Gundam universe. A Psycho-Frame is a type of mobile suit that, rather than being piloted by movements, is piloted by a direct connection to the pilot’s mind. This allows for much faster reaction times and more fluid movement than those that are piloted through more conventional means. Psycho-Frame do have a draw back, the strain they cause on the mind. Because of the incredible strain caused by the frame on the pilot, Mobile Suits with these types of frames can only be piloted at max ability for a short time before permanent damage is done to the pilot. The main mobile suit in Gundam Unicorn is actually a hybrid frame. It has conventional controls for use in flight and battle, but for the true abilities of the suit, the pilot needs to activate the psycho-frame and hope they can win the battle before the strain causes them to black out. The Psycho-Frame technology was developed by the Zeon forces and was how Char Aznable was able to defeat so many other pilots in battle.

If you’re a fan of large robots fighting in space then I highly recommend that you get into Gundam. Gundam is the pioneer of the Mecha-Anime trope and the large fascination with big fighting robots in pop culture. It’s very evident that a large amount of typical tropes and homages in both science fiction and fantasy come from the original series of Gundam. Pacific Rim’s entire idea is based off two incredible Japanese franchises (Gundam and Godzilla) clashing in the modern world. I, for one, loved the first Pacific Rim. The second… not so much. But the first was amazing and delivered on exactly what it said it would, giant robots fighting giant aliens with fisticuffs!

While it may not hold as special a place in my heart as it does for other, Gundam has been and still currently is, one of the top billing franchises of all time. That alone should give you the push you need to get into this great franchise. If you need more, watch this clip from Gundam Unicorn…