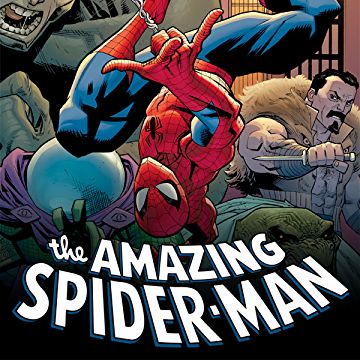 Earlier this morning I was perusing my Instagram feed and stumbled across a post from a page I had recently started following called, spidey.prime. It was a quote from one of the newer Spider-Man runs from marvel comics Amazing Spider-Man (2018). As of right now the official name of the villain is still unknown but he has been called Centipede, mainly because of the large centipede like creature on his shoulder.

His face is bandaged up (much like Hush in Batman), but he knows Peter “better than he knows himself”. He has so far demonstrated the ability to : stop time/ cast illusions, resurrect people, he has made deals with multiple villains, and he is extremely wealthy and powerful. There are many speculations being thrown around as to who he is, some think he is the Demon Mephisto ( who bonded Johnny Blaze to Zarathos and made Ghost Rider, who brought Aunt May back to life and made the world forget about Peter’s secret identity in exchange for undoing Peter and Mary Jane’s marriage), an alternate Peter that has been tortured in Hell, Norman Osborn, or even Morbius.

The leading consensus is that the Centipede is the demon Mephisto in disguise, but there is no clear answer on the purpose.

The quote comes from the newest issue of the comic when Peter confronts him and tells him to leave Mary Jane alone, this is what Centipede has to say:

I’m disappointed in you, Pete. You think I’m just gonna go and off your one true love like some bad cliché villain? You see, I don’t want to hurt her. I told you I’d protect her, and I meant it. I’m trying to protect her from the greatest threat she faces, after all. You. It’s always you, Pete. When she dies, it will be because of you. Just like all the others. And then we’ll finally be alone together.

It’s a very cryptic message and one I am dying to know the answer to! I’m going to have to pick up this run and start adding my own theories to the list!