The world changed when the dragons returned. The ancient feud between the Chromatic Dragons and the Metallic Dragons was reignited after thousands of years. Along with the dragons, came magic. Not scholarly magic as taught by the Wizard’s Conclave, but Wild Magic, untamed and raw, a powerful force if channeled correctly, it is the native magic of the dragons themselves. Not only did a resurgence in natural “Wild Magic” occur but the portals to the Netherealm, believed to have been closed for tens of thousands of years, opened…

Demons, Ghouls, Wights, and other nightmarish creatures have begun to invade the land killing indiscriminately and raising the dead to join their ranks. The Dragons formed an truce to combat the new threat and began a campaign to close the portals and extinguish the dead from the land, there was just one problem, the dragons were losing. For every portal they were able to close, 2 more would open up and the lives lost to close the portal joined their enemy. The dragons were fighting a losing battle and couldn’t find a way to win.

On the verge of falling to the nightmare, an alliance was formed amongst all the species, both good and evil, to push the nightmare back and close the portals. Powerful mages from both sides allied together and sealed the portals with magic from the Dragon Orbs, powerful magical artifacts that contain the essence of Wild Magic. Once the nightmare had been defeated and the creatures destroyed, these Dragon Orbs were divided up amongst both sides with the knowledge of what could happen if either side decided to use them. An uneasy peace took the land for several years until the first attack by the Dragonlord Berylinthranox. Wanting more territory for herself, she launched a campaign to claim the land from Abanasia all the way to the borders of the Silvanesti kingdom to the west. This provoked all the other Chromatic Dragonlords to claim territory for themselves: Malystryx, Khallehandaros, Onyxstryx, and Sacrantaros claimed huge swaths of land from the Eastern most tip of Sancrist to the Eastwilde.

The kingdom of Solamnia, home of the Solamnic Knights, caused massive problems for Onyxstryx. The Knights, who were the governing force of good in the land, refused to bow to a Dragonlord and began a war against him and his forces. Reluctantly, Onyxstryx requested help from the other Dragonlords and their armies to quell the rebellion in Solamnia. The other Dragonlords agreed if they were permitted to divide a large portion of the land between them, Onyxstryx agreed and the armies gathered. It took one Solamnic Knight, Huma Dragonbane, who had rallied the remaining metallic dragons and support from the Elves and Dwarves to halt the Dragonlords advance. The battle lasted days, with heavy casualties on both sides.

The Gods watched as the battle unfolded with the evil Goddess Takhisis aiding her Chromatic Dragons and Paladine, the king of the Gods, aiding the Solamnic alliance.  Eventually when she feared her “children” to be losing, Takhisis journeyed to Earth and took her form of a giant 5 headed dragon, each head representing a different colour of chromatic dragon. Unwilling to allow his sister to tip the scales in favour of evil, Paladine also journeyed to Earth and took the form of a very powerful Wizard. Paladine aided the Solamnic Knights in crafting the Dragonlances, powerful weapons able to kill Dragons with a single blow to the heart.  Huma mounted his Silver Dragon, Palladium, and together they led a charge against the Chromatic Dragons. Huma himself struck down Takhisis, perishing in the fight. As Takhisis fell, all the dragons across the land disappeared leaving just the armies alone without wild magic.

For nearly a thousand years the land has been at an uneasy peace. With the dragons gone, the evil forces retreated to their strongholds in the north and east,  and the world began to heal. The land of Solamnia was returned to the knights who rebuilt their order and honoured those who died to bring an end to the war.

While the Dragonlord war is marked in history as fact, the Nightmare has passed into legend. No evidence of the creatures exist and the stories told to frighten the young children are all but myth.

Each member of your company received a mysterious letter telling them to meet at the Inn of the Last Home in Solace on the 3rd Sunday of Summer. In the letter it specifies that you will meet a man, and that he will know you but you will not know him. He will have a task for you to complete and the fate of the world hangs in the balance. Nobody is sure as to who sent the letters, but each one contained a single white chicken feather. 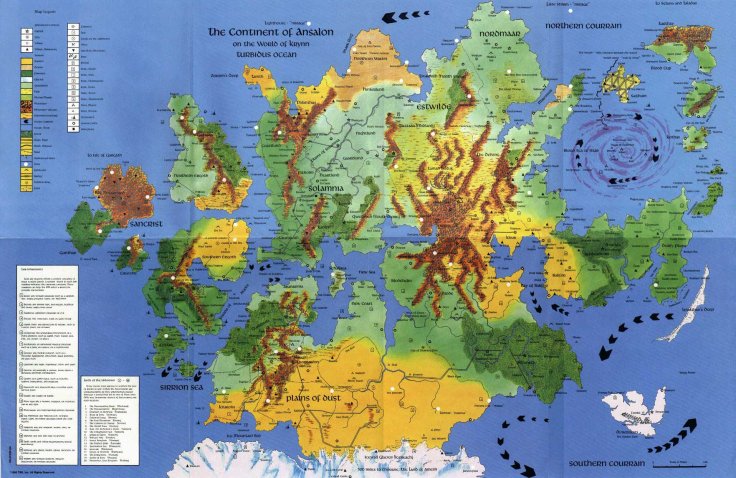