This week, I decided to focus on Star Wars since the release of the Solo: A Star War Story trailer on Monday morning. I will not be doing an analysis of the trailer frankly because it’s under 2 minutes long and for some reason this movie doesn’t interest me as much as Rogue One did. With all the drama that went on behind the scenes of this movie, and the studio reportedly not having faith in it, I won’t be holding my breath on this one.

Enough about Solo, let’s get back to the post at hand… how Siths get their lightsabers? Before we dive into the Expanded Universe answer, and the newer retconned Marvel answer, a quick history lesson on the Sith and how they came to be.

First thing to say is that unless you have delved deep into the expanded universe (prior to Disney purchase); you are probably not aware that the term “Sith” actually describes a species of alien which evolved on the planet Korriban. This takes place roughly 100,000 years before the battle of Yavin (BBY). It wasn’t until roughly 28,000 BBY, that the Sith King Adas, successfully united the peoples of Korriban and ruled them as their Sith’ari (Warlord). Adas’ reign lasted unopposed for several centuries until an invasion by the Rakata of the Infinite Empire put that into jeopardy. Adas waged a war against the Rakata effectively driving them from Sith Space. During his rebellion Adas’ troops secured Rakata ships and used them to expand the Sith Empire to Ziost, Tund, and Malachor V. His victory was short lived, as the fighting had cost Adas his life. The Sith species fell to infighting with several factions scrambling for the power left by Adas. The planet of Korriban was ravaged by war and when a new Sith Warlord destroyed the cities of Korriban, the Sith species were pushed back to the primitive stages.

In 25,053 BBY, the first Galactic Republic was being formed on the planet of Tython. Leaders and warriors from across the galaxy traveled to Tython to discuss the energy field present in the galaxy, the Force. Several of the members in attendance advocated for the use of Bogan. Bogan is what we would eventually come to know as the Dark Side of the Force. During the Force Wars of Tython the followers of the light fought and defeated the followers of Bogan. During 24,500 BBY, a Jedi named Xendor left the Jedi order along with many other students to pursue the Dark Side. Taking the name of Legions of Lettow, they came into conflict with the reigning order of the Jedi. The war between these two sides became known as the First Great Schism and resulted with the Legions of Lettow being defeated;  and thus the light side fostered for thousands of years. 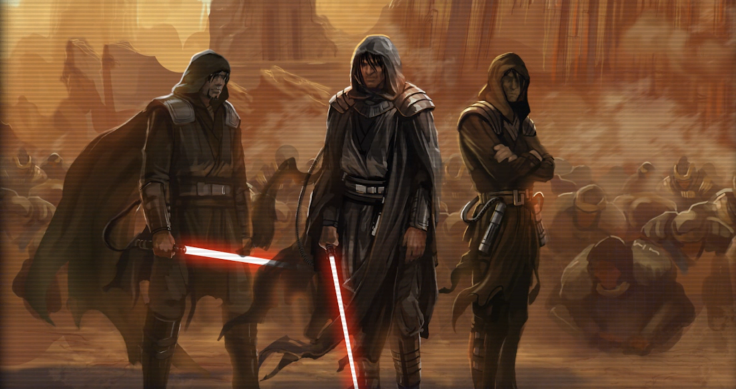 7,000 BBY was the year that the Dark Side gained a hold again. Several Jedi had come to learn of the dark workings that the force could manage and had become reliant on them. When they campaigned for support from the Jedi Order they were cast out and deemed “Dark Jedi”. These Dark Jedi then launched a war against the Jedi Order that would be known as the “Hundred Year Darkness”. During the Battle of Corbos, the Dark Jedi were defeated. Unable to control their infighting, they slaughtered more of themselves than the Jedi did; leaving the few remaining to be killed by Jedi bombs or captured. After their defeat, the Jedi loaded their prisoners onto unarmed transport ships and took all their weapons from them. The ships were pre-set to enter the unknown regions of space which would allow the Dark Jedi to contemplate the error of their ways.

Their ship emerged from hyperspace over the planet of Korriban. The Dark Jedi quickly used their mastery over the Dark Side of the Force to win favour with the Sith. The Sith people were so  amazed by their abilities that they were named “Jen’ari “, which means Dark Jedi in the Sith language. The Dark Jedi formed a close relationship with the King of Korriban, and then used that relationship to overthrow him. Once they overthrew the king and any who were loyal to him, they acted swiftly to take dominion of the Sith species. The Dark Jedi then proclaimed their leader as the Dark Lord of the Sith; and thus, the modern order of the Sith was born. Over the next several generations the Dark Jedi and the Sith of Korriban interbred to the point where they were a single entity and not able to be distinguished apart.

The History of the Sith spans tens of thousands of years and is far too much to concentrate into one post. Just know that until roughly 60 BBY, the Sith waged many wars against the Jedi and the Republic even going so far as to attack the Jedi Temple on Coruscant directly.

Alright, so now let’s get down to the topic of this post, how a Sith gets their lightsaber. Prior to the Disney purchase, the Star Wars Universe was quite expansive. It encompassed hundreds of thousands of years of history and provided rich backstories to some well known characters while establishing complete new characters as fan favourites.

Most Star Wars fans know that a Jedi creates their own lightsaber when they are a young Padawan. The television show Star Wars: Clone Wars actually explains the entire process in an episode during one of the later seasons of the show. Each Padawan must find their Kyber crystal and construct their own saber. The Kyber crystals are what actually power each individual lightsaber. They themselves are believed to be sentient, in that not every Kyber crystal will work the same for each Jedi.  While a Jedi is able to use any lightsaber, the one they created with their own crystal will always be more in tune with their personal connection to the Force. The Sith have moved past this trivial bond between crystal and user.

In the Expanded Universe, the Sith have perfected the creation of synthetic Kyber Crystals. The synthetic crystals actually came more out of a necessity rather than the will to find an alternate source. When the Dark Jedi were first exiled, they retained their regular blue/green sabers. They used these sabers until they were taken from them, after their defeat, before they were cast out to Korriban. Being branded as wanted fugitives put a damper on them being able to stroll into a Jedi controlled system to retrieve a Kyber crystal to make a new saber. The Sith therefore found a way to manufacture power crystals to use in their sabers.

The Manufacturing process is pretty standard and was actually a very common process for scientists in the Star War Universe. It utilizes a piece of lab equipment referred to as a Geological Compressor. This compressor was originally used to simulate the geological conditions on distant planets in a lab setting. The Sith used this tech with some slight modifications to create the synthetic Kyber crystals. The crystals naturally come out with a red colouring due to the synthetic process, and as such generate a red blade. While the colour can be changed easily, the Sith liked to keep the red sheen to make sure they were distinct from the Jedi. The individual would load the raw minerals into the machine and leave it for anywhere between 24 hours to four days. During the process, the individual creating the crystals would meditate and focus the force into the chamber to create the potent and strong crystals.

While this process was much quicker than finding naturally occurring crystals, it created unstable blades. Most Sith utilized the unstable blade because it was stronger than a natural blade. During combat the Sith blade stood a chance of “breaking” the Jedi blade by overloading the energy matrix of the Jedi saber and shorting it out.

The unstable nature of the lightsaber cause problems for the Sith as well. While it would cause more damage when it struck due to the unstable energy, it was also prone to shorting out temporarily.

Post Disney purchase, most of the Expanded universe was scrapped while Disney worked to create a new universe in which Star Wars would take place.  In this new Universe the only things that were deemed canon were the movies (original trilogy and prequel trilogy), The Clone Wars movie and TV show and the new trilogy. Since then the Universe has expanded to include the new TV show Rebels. During Rebels  we are also gifted with some Easter Eggs in the form of name drops for major conflicts ie. The Mandalorian Wars; showing that Disney is expanding the universe to include some of the original Expanded content.

Recently Marvel has begun releasing new content in the Star Wars universe which is considered canon by Disney. One of these titles is a favourite of mine, Darth Vader: Dark Lord of the Sith. This series picks up immediately after the events of Revenge of the Sith, with Darth Vader finding his way in the new Empire. The First task Vader is given as a new Lord of the Sith, is to get a lightsaber.

It is revealed through the first couple of issues that the Sith have never used synthetic crystals to create their lightsabers. While watching as the “traitorous” Jedi’s lightsabers are incinerated in front of the Galactic Senate; Palpatine provides Vader with the truth behind the Sith’s lightsabers. A Sith does not manufacture their own lightsaber, they kill a Jedi and take theirs. Sith for thousands of years have used this method to gather their lightsabers and now Vader must do the same. When pressed further, Palpatine tells Vader that the reason that the Sith lightsabers are red and not green or blue is because they have been made to bleed.

When a Sith kills a Jedi and takes their lightsaber, the process of transforming the blade has only begun. The Sith must then take the blade to the “source of their power”. In Vader’s case it was the planet Mustafar where he “died”. There the Sith dismantles the lightsaber to reveal the crystal and by using the Force, imbues the crystal with all of their hatred, anger and malice. This causes the crystal to bleed and become the deep crimson of the Sith’s blade.

Once the Sith Lord has achieved the crimson blade he is then a full member of the Sith Order and can take his place at his master’s side. This task is difficult for most Sith after the execution of Order 66 due to most of the Jedi being hunted down and killed. It is revealed through the new comic series, and through Rebels, that there are quite a few Jedi who survived the purge and are hiding throughout the galaxy. In order to root out the remaining Jedi from the galaxy, the Emperor has begun training Inquisitor’s to operate as hunter/trackers for hiding Jedi, and to kill any they find.

So there you have it! That is how the Sith got their lightsabers in both the original Expanded Universe and the new Retconned Universe. Let me know what you think!