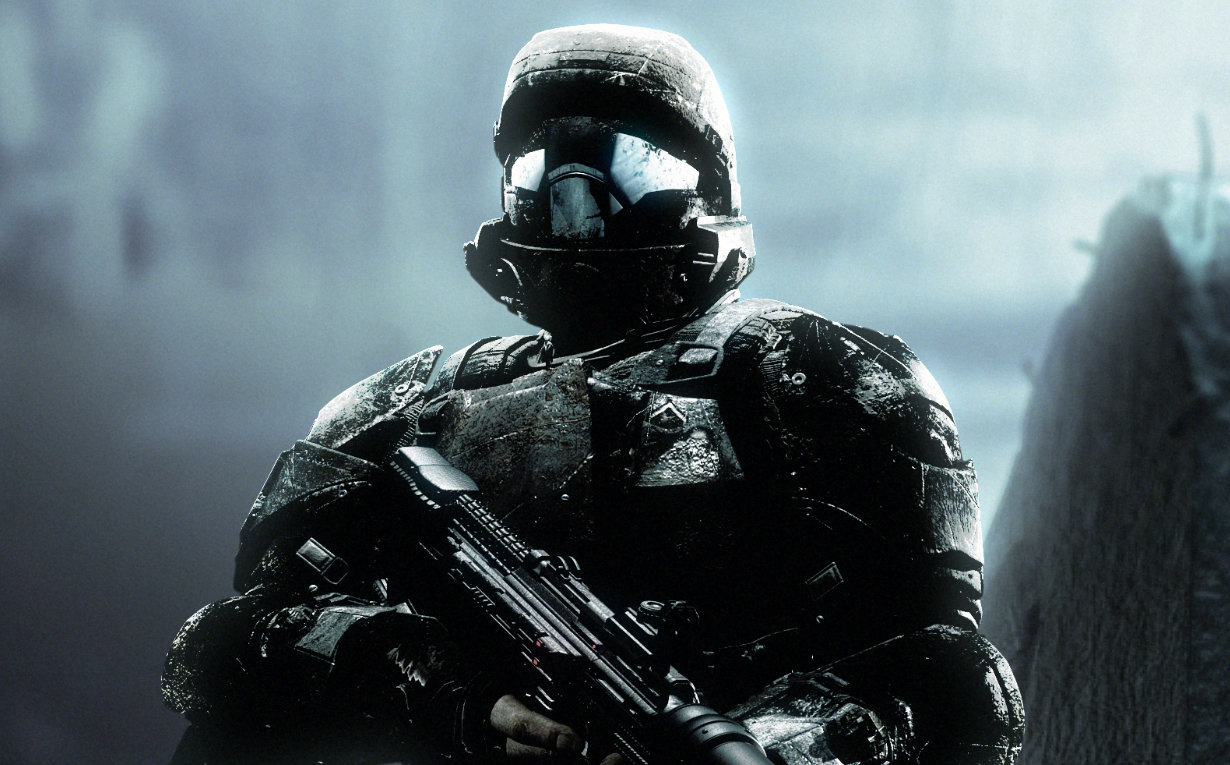 With the anniversary of my one year on this site, I decided to expand some of my posts to include video games as well. That is not to say that I will be stopping with the comics, because I could never stop with comics. That being said, I will be adding a monthly inclusion from the Halo universe just like my Underrated Heroes series. So to start off the Halo series I decided to focus on a group of characters in the Halo universe that tend to get overlooked, Orbital Drop Shock Troopers aka ODSTs or Helljumpers.

Now the ODSTs are not just a singular squad of soldiers. To put it in relative terms, picture the ODST’s like the Special Forces of a country’s military; only instead of one country, it’s the UNSC (United Nations Space Command). One thing (among many others) that was achieved in the Halo universe, was the unification of the planet into one entity and the solidification of the world’s collective armed forces into one military. This allowed for great strides in technology and innovation because no singular country was trying to out do the other.

What makes the ODST’s so unique is the fashion in which they are deployed. Typically, in the Halo universe, the soldiers are deployed by either Pelicans (Air Transports), MCCs (Mobile Command Centers) or Elephants (Armoured troop transports).  The technical name for the method in which the ODSTs are deployed is referred to as “Transorbital Support Interdiction”. The ODSTs are secured in their drop pods (Single Occupant Exoatmospheric Insertion Vehicle or SOEIV) on their respective ships or orbiting stations and dropped from a low altitude orbit into their landing zone. The pods are designed for a fast/hot re-entry into an atmosphere and to withstand the impact of the fall from space, hence the name “Helljumpers”.

Prior to being able to enlist in the ODST training program, each applicant must first undergo basic training. The applicant must first pass Marine Basic and then are able to enlist in the ODST program. Anyone who is a fully fledged member of the UNSC military branch is allowed to enlist in ODST training, but only few make it through. Being RTU’d (Returned to Unit) after failing out/ being removed from ODST training is considered the most embarrassing thing a person can endure in the UNSC. The embarrassment factor is so high, that most washouts would rather choose death than being sent back a failure from ODST training.

In order to ensure all candidates are in top physical shape the first few weeks in ODST training is focused on physical training and strength tests. They train in all weather conditions and in all environments to ensure top physical conditioning. The recruits are made to crawl through miles of barbed wire and various unforgiving environments while the Drill Instructors fire live rounds over their heads to simulate a war zone. The ODST recruits also practice jumping from high locations to prepare for their orbital drops. 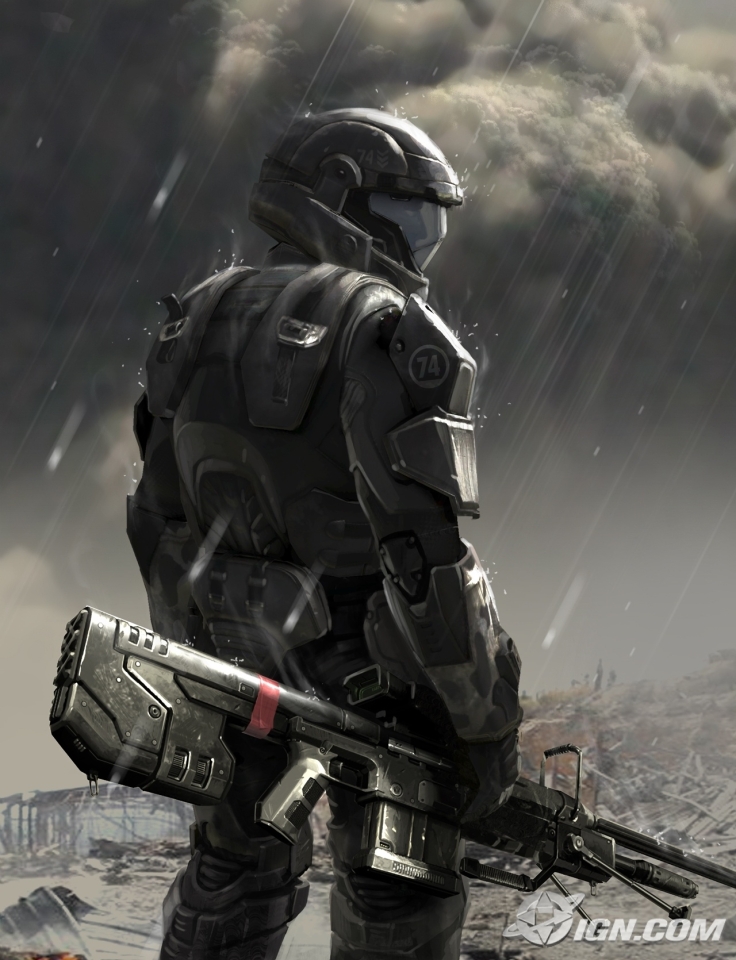 After the physical training is completed during the first three weeks, the following weeks are spent in squad based drills and tactics. ODSTs work in squads of 2-4 Fireteams, with most Fireteams consisting of 6-8 troopers. One of the most grueling tests an ODST recruit must undergo is during the weeks of squad training. The recruits are made to don full ODST battle gear and are dropped at the base of a mountain or gorge. The Drill Instructors are dropped behind them and given weapons loaded with Tactical Training Rounds (TTRs). The TTRs cause temporary paralysis in the area around the impact and leave a distinct red splatter where they hit.  Once dropped, the recruits are ordered to reach the peak of the mountain. If they fall behind or the Drill Instructors feel they are going too slow, the Drill Instructors shoot the recruits in the leg with a TTR. This causes the recruits to lose the function of the leg they were shot in and are forced to crawl to the top of the mountain as punishment. This test is run several times with varying difficulties added, to the culmination of the final run wherein the Drill instructors are dropped on the top of the mountain in full gear and armed TTRs to stop the recruits acting as an “opposing force”. The exercise is meant to teach the recruits to work as a unit and that sometimes in war sacrifices need to be made for the rest of the mission to survive.

Following the Squad drills the ODST recruits are broken up into Fireteams and given additional tactical training. After Fireteam tactics are thoroughly taught, the Fireteams are put back in squads ( each squad consisting of at least 2 Firetams) and given the task of taking the peak of the mountain again. This time the drill instructors are merely observers as each squad is pitted against the others to see who will emerge victorious. This type of training was meant to teach the Fireteams to work together to achieve the goal.

Among everyone in the UNSC, the ODSTs are said the have the strongest battlefield resolve after the SPARTANS. They are among the most tenacious and fierce warriors the UNSC can field. Due to their rigorous training and fierce camaraderie, ODSTs  are known to be some of the most loyal to their own. While off duty and surrounded by other ODSTs they are the most jovial and carefree of soldiers. When off duty and not with other ODSTs they are very stoic and unfriendly to anyone who is not one of them.  While most marines believe the SPARTANS to be Gods on the battlefield, they also agree that if you give an ODST a mission they will find a way to accomplish it regardless of the consequences. ODST officers and squad leaders command their squads from the front on the battlefield, due to the fact that ODSTs do not respect authority without competence. ODSTs believe that if you have the rank, you should have the battlefield experience to back it up.

Officers in the ODST regiment are meant to lead from the front and thus any officer should be willing and able to do any task he orders a subordinate to do. As such most officers do not survive for as long. Those that do are greatly respected among all ODSTs for their bravery and battlefield experience. ODST officers undergo a ritual wherein the Kanji symbol for “Bastard” or “Badass” is tattooed on them by their men. Should a tattooed individual ever present the tattoo to any ODST, active or retired, the ODST will obey the tattooed officer’s every word. 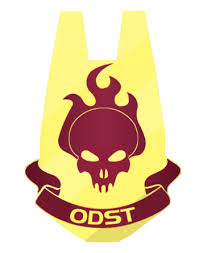 The battle dress for the ODST regiment is as follows:

The ODST weaponry is the same as the standard UNSC armoury loadout. Each ODST trains with a specific weapon to diversify the fireteam.

The Single Occupant Exoatmospheric Insertion Vehicle (SOEIV) is shaped like a tear drop and is protected by a ceramic skin. They are made to handle the extreme stress and heat of re-entry into a planet’s atmosphere. They have a one time drop use, and are destroyed upon completion of the mission at hand.

UNSC Insertion Protocols dictate that while the officer’s SOEIV is the last to be deployed, it has a thruster attached to propel it past the rest so that the officer reaches the ground first.

The SOEIV is equipped with the ODSTs weapons, ammo, supplies, and tactical data required for the mission. upon successful deployment, each ODST is tasked with bringing the supplies from their own pod to the FOB (Forward Operating Base) for the mission.

Despite roughly 15 different divisions of ODSTs in service in the UNSC, the list of notable ODST members is rather small.

The most notable ODST is Edward Buck; Buck was the fireteam leader during the campaign of Halo 3: ODST. During the campaign of Halo 3: ODST, fireteam Alpha-Nine was tasked with dropping into Covenant occupied New Mombasa and retrieving a defecting Covenant engineer.Voiced by Nathan Fillion, Edward Buck, he has made multiple appearances in several games, most recent being a core member of the SPARTAN-IV Fireteam, Osiris, in Halo 5: Guardians.

Aside from Buck the most notable ODSTs are those of Fireteam Alpha-Nine, the main unit during the Campaign of Halo 3:  ODST. The fireteam members are as follows:

The Fireteam would go through several campaigns and battles losing and adding members until eventually following the Uprising on Draco III, they were inducted into the Spartan IV program. With the death of “Rookie” during the Draco III mission, “Dutch” resigned from the UNSC; retiring with his wife and fellow ODST, Gretchen Ketola.

The members of Alpha Nine that served with distinction until their deaths are as follows:

After first contact on Harvest with the Covenant on November 1, 2525, the UNSC redeployed all active ODST battalions to combat the Covenant threat. In April of 2526, the Covenant attacked Corbulo military Academy on Circinius IV, wiping out all ODST units deployed in defense of the school and all personnel (save 4 survivors).

ODST units would be deployed during several major battle during the Human-Covenant War with varying degrees of success. During the Fall of Reach in 2552, countless ODST squads and personnel were lost in the defense of strategic sites around the planet.  Shortly after the fall of Reach, the battle for Earth began. In October of 2552, with the exception of the units assigned to ships in deep space, all ODST units were recalled to Earth to defend against the invading fleet.

The UNSC Spirit of Fire (declared lost with all hands) has a full contingent of ODST troops from the 9th Shock Troops Battalion.

Anyone familiar with the Halo universe knows that the SPARTAN-IIs are the Gods among the UNSC military personnel. What would take multiple battalions of marines to accomplish, one SPARTAN-II can do. ODSTs are the peak of the human military contribution. They were not as selective of the applicants like the SPARTAN programs were (until the SPARTAN programs were declassified and opened to the public in 2553); anyone with the proper strength and willpower could be an ODST. They walked like superstars among the rest of the UNSC military and they knew it. But for all the bluster and praise they received, they never asked for any of it. Most of the Special Forces nowadays are referred to as the “silent professionals”. They go in, do the job, and leave without expecting praise; this is exactly how the ODST units operate. Don’t get me wrong, the SPARTANS performed amazing feats and the war wouldn’t have been won without them; however, by the end of the war, the SPARTANS were relegated to folk tales told to instill hope or resolve in new and injured marines.

The ODSTs were never folk tales. They were there, on the front lines leading the defense of humanity against the Covenant. They didn’t have personal exosuits that could withstand tank shots, being dropped from space, or crushed under tons of debris; they had their wits, training, and resolve. They stood side by side with the rest of Humanity defending their home from the aliens that wished to destroy it.  For that reason alone, the Orbital Drop Shock Troops are the unofficial badasses of the Halo universe.