This week I decided to take all of the villains  that I know from Marvel and DC Comics and pick the top 5 that I think are the worst psychopaths. To clarify I was not looking for body count alone but for unhinged behaviours and sadistic actions. Without further ado, here are the top 5 psychopaths in mainstream comics.

Coming in at no. 5 is none other than the (arguable) arch nemesis of the Man Without Fear, Bullseye. His first appearance was in Daredevil #131 of March 1976, and since then he has come to cause nothing but torment and mayhem for Daredevil. Not much is known about him except that he grew up in the Bronx with an abusive father and an older brother. He was a gifted marksman and as such entered the minor leagues as a pitcher, being called up for his first and last ever major league game. After having pitched a perfect game he grew bored and asked to be taken out, but the coach refused telling him to finish the game. When the batter taunted him for being a coward Bullseye threw the final pitch of the game which struck the batter in the head killing him. He was hired as an assassin by the NSA but quickly defected and joined various Cartel’s as a gun for hire. He began his costumed criminal career as a hitman for hire being know for never missing. After being defeated by Daredevil twice his reputation was ruined and he began his crusade against Daredevil to reclaim it. Over his comic career he has killed Elektra ( Daredevil’s lover) with her own sai, Karen Page (Daredevil’s girlfriend) with one of Daredevil’s Billy Clubs, and used explosives to drop a tenement building killing hundreds.  He later joins the Thunderbolts as an “as necessary member” and eventually joins Osborn’s Dark Avengers. In Shadowland he is impaled by one of his sais by Daredevil (at this point possessed by the beast) after breaking both of Bullseye’s arms in a fight.  He has since been resurrected and continues his crusade against Daredevil.

Ranking in at No.4 is the Time manipulator himself, Zoom. The interesting thing about Zoom is that he didn’t start out on  a bad path. he was an expert investigator and profiler.  He studied both criminology and psychology before enlisting in the FBI, along with his then girlfriend Ashley. Ashley’s father was killed during a case when Hunter made a bad call, Ashley left him and he was injured to the point of needing a cane to walk. He took a job in Keystone City as a profiler which is where he met Flash (Wally West) and the two became friends. During an attack on Iron Heights by Gorilla Grodd, Hunter was paralyzed from the waist down. He asked Wally to use the cosmic treadmill to reverse time and fix it but Wally refused. Hunter then broke into the Flash museum to use the treadmill, the resulting explosion destroyed the museum but gave Hunter the use of his legs and “derailed” him from the time stream giving him super speed. Zolomon came to the realization that the reason Wally refused to help him was because he had never experienced great tragedy as the previous Flash (Barry Allen) had. He attacked Flash and caused Wally’s wife (Linda) to miscarry the twins. Believing his work was not done he proceeded to make it his mission to kill Linda so that Wally would know true loss. In Final Crisis: Rogues’ Revenge, Zoom cures Inertia of his paralysis and begins teaching him to “better” the lives of other by inflicting tragedies upon them. Inertia grew jealous and paranoid of Zoom and unraveled Zoom’s personal timeline to the point where Zolomon lost his powers and became a cripple again. Zolomon has since approached Eobard Thawne (Reverse Flash) in Iron Heights, with a way to “benefit them both”.

Superboy Prime takes No. 3 and rightfully so. As the list progresses each member gets a little more unhinged. The sad thing is that this entry on the list, like Hunter Zolomon actually started out as a good guy. During the Crisis on Infinite Earths storyline Superboy Prime helped the combined heroes of the DC multiverse to defeat the Anti-Monitor. After they beat the Anti-Monitor, Earth-2 Superman and his wife Lois, Earth-3 Lex Luthor Jr., and Superboy Prime were hidden in a “paradise” dimension. It was here that Superboy Prime’s mind began to unravel. He begins pounding on he walls of reality causing many alterations to main continuity, one of these was Jason Todd’s resurrection. Alexander Luthor Jr. from Earth-3 informs Superboy Prime that his powers are returning and then combine forces with him causing the dimension to shatter and starting Infinite crisis.  Driven jealous by Superboy of Earth-1 (Connor Kent) and his life with Ma and Pa Kent, he challenges Superboy to a fight. Superboy activates his Titans homing beacon and several other heroes show up to assist. When Superboy Prime kills Pantha by punching her head off, Bart Allen, Wally West and Jay Garrick grab Superboy Prime and imprison him in an alternate world where he is kept in a prison cell under red sunlight for 4 years. He escapes during the fight between Earth-3  Alexander Luthor Jr. and is covered in a version of the anti-monitor’s armour that constantly feeds yellow sunlight into him boosting his power levels. When he attempted to kill Wonder Girl, Connor Kent (Earth-1 Superboy) grew enraged and attempted to take him out. Connor was killed when the two Superboys smashed into Earth-3 Lex Luthor Jr.’s device. In probably his most unhinged idea, Superboy Prime decides to fly into Oa and smash it causing anew Big Bang which will kill everything else leaving him as the sole hero. He is slowed by a 300 mile thick wall of Willpower generated by the entire Green Lantern corps, but he breaks through it and slaughters 32 Green Lanterns before the two Supermen stop him, with Kal-L (Earth-2 Superman) dying in the process. He is imprisoned by the Guardians of the Universe and placed in a Quantum containment cell which is blasted with red sunlight and guarded by 50 Green Lanterns at all times, it’s during his imprisonment in this cell that he carves the Superman symbol into this chest while stating “I’ve escaped from worse prisons than this…”.

Coming in at No.2 is none other than the Clown Prince of Crime himself, the Joker. Most people would ask how Joker doesn’t take the top spot and who could oust him for maniacal acts. Read on and you will see. The Joker really doesn’t need any explanation why he is up here but one example of his psychopathy comes from the Killing Joke story line by Alan Moore. In this story Joker has taken it upon himself to prove that anybody can turn into him if they have one bad day. The entire story is based around the fact that you could take the sanest person alive and give them one bad enough day, and they would turn into the Joker. During this story, Joker decides to target (arguably) Batman’s greatest ally, Commissioner Jim Gordon. When the Commissioner is at his daughter’s house for their weekly Sunday meal, Joker arrives and knocks on the door. When Barbara opens the door, Joker proceeds to shoot her through the abdomen and sever her spine, paralyzing her form the waist down. His goons assault and knock out Commissioner Gordon, and as they’re dragging him away the Joker really sets to work. In the story Joker strips Barbara naked while she continues to bleed on the ground and photographs her. I know myself and many others believed an assault to have taken place during this scene as well; however, writer Alan Moore has since clarified that nothing of that nature takes place. Regardless, he photographs her and she lies helpless in her own blood and leaves her. He takes the Commissioner to an abandoned amusement park where he strips him and forces him to crawl on the ground as he continually shows him the photos of his brutalized daughter. Batman ends up arriving in time to save Jim and Jim tells Batman to “…bring him in by the book”, showing that the Joker had failed. This comic also has one of the most controversial endings of all time with enough ambiguity to imply several different interpretations. This isn’t one of Joker’s most brutal examples with a high body count but it goes to show just how unhinged the Joker really is as a villain. For some truly despicable acts, Joker by Brian Azzarello, is the graphic novel you need to read. 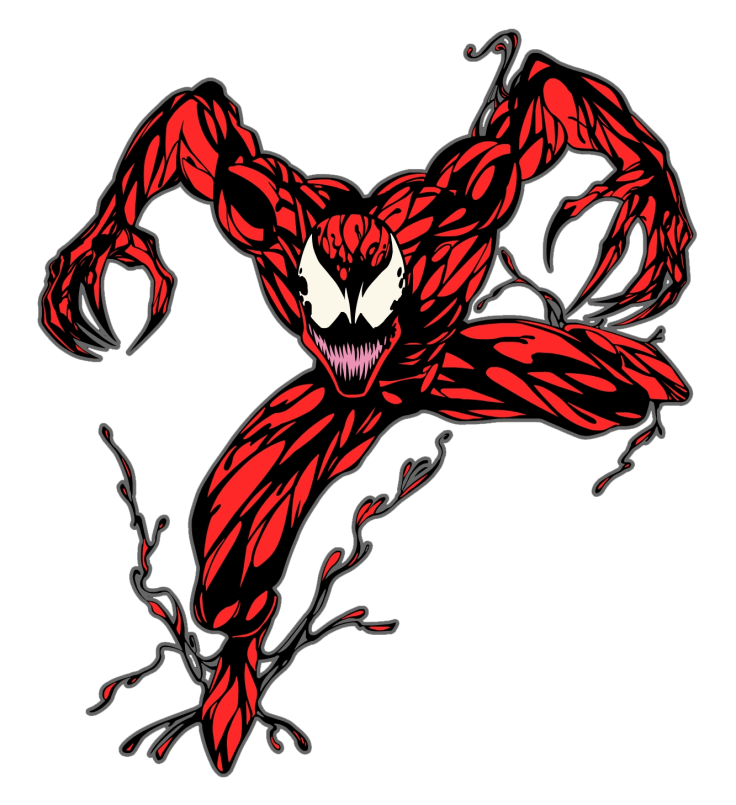 Ranking in at No.1 is none other than Carnage, the “Child” of the Venom symbiote that bonded with notorious serial killer Cletus Kasady. Kasady exhibited his psychopathic tendancies from an early age. His first human kill was when he was 6 and he purposefully tripped his grandmother so she would fall down the stairs. He goes on to say that the resounding crack of her neck snapping was one of the happiest moments of his life, and that his only regret was that he had to wait five hours for his mother to get home and cook him dinner. He graduated to watching his mother get beat within an inch of her life, torturing the family dog in the tub with a power drill, attempting to murder his mom by throwing a hair dryer into the tub while she was bathing and killing the disciplinarian of the boys home he was in. From there he burnt down the boys home (possibly killing dozens) and pushing a girl in front of a bus after she laughed at him for asking her on a date. By the time he was caught and put in Ryker’s he was convicted of 11 murders and bragged about dozens more. Then he became Carnage when his cell mate, Eddie Brock broke out when his symbiote returned to him. Brock’s symbiote left a piece behind which bonded with Kasady making him Carnage. Not only is Kasady a complete psychopath and a mass murderer but he also has grossed out the Joker with his ideals. In a crossover with Spider-Man, Joker and Carnage stumble upon each other and begin to fight. Carnage ridicules Joker for his ridiculously complex plans and tells him he knows nothing about killing.  Carnage goes on to say ” … slow and horrible deaths! What a monumental waste of time! The fun of killing, you moron, is in the immediacy! In hearing them beg for mercy as you stand over their bloody bodies…peeling off their skin!” The Joker is disgusted by this and actually says “BLECCHH! How utterly distasteful and gross too!” This also doesn’t even count when in Carnage USA Carnage forcibly took over an entire town and murdered several people including a little girl before taking control of the Avengers.

There you have it, those are my top 5 psychopaths in mainstream comics. Don’t agree with my list, let me know who you think deserves a spot in the top 5. See you next week!